(Inside Science) — Boston Light, America’s oldest lighthouse station, turned 300 this year. Built on a small, rocky island near the entrance to Boston Harbor, it draws visitors not only for its age, but for the chance it offers to view a piece of technology that some argue changed the course of the 19th century: a massive lens made from hundreds of sparkling glass prisms. 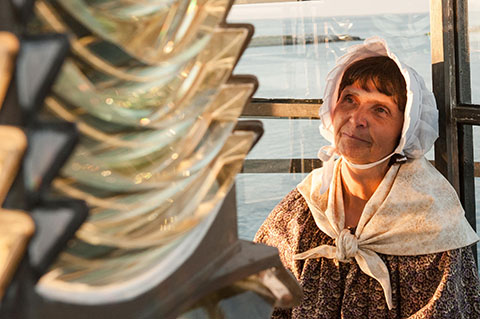 “It’s 4,000 pounds of glass and brass,” said Sally Snowman, the keeper at Boston Light, describing the apparatus that greets visitors at the top of 76 spiraling stairs and two ladders. “I call it the crystal Christmas tree. People are in awe when they see it.”

When the lens was installed in 1859, it replaced a chandelier with multiple oil lamps and reflectors. The new lens dramatically increased the range of the light signal, meaning ships far offshore could be warned of danger in plenty of time.

Government documents from around the time of the installation report the improved visibility from similar lenses in other U.S. lighthouses “was indispensable for the safety of navigation.”

The 336 individual glass prisms in Boston Light’s lens all serve one purpose: to concentrate the light that radiates in all directions from a central lamp into narrow beams. The lens’ 12 panels, arranged in a rounded shape about the lamp, shoot out shafts of light like the spokes in a wheel. The whole assembly turns slowly on metal wheels so that the light appears to flash to ships at sea. With the current 1,000-watt lamp, the signal can be seen by ships 27 nautical miles away.

The lens was the brainchild of French physicist and engineer Augustin-Jean Fresnel, who was fascinated by the behavior of light.

In the early 19th century — when Fresnel was a child and young adult — lighthouses were feeble beacons, visible generally for under 10 miles in good weather and even less on stormy nights. Many times, the range was not good enough. Coastal shipwrecks drowned sailors and destroyed cargo with disturbing regularity.

At the time, the state-of-the-art in lighthouse technology was shiny metal reflectors specially shaped to concentrate the light from multiple oil lamps into a beam. The problem was that they were inefficient — reflecting only about 50 percent of the light that hit them.

Fresnel found a better way to redirect light, using glass instead of metal. 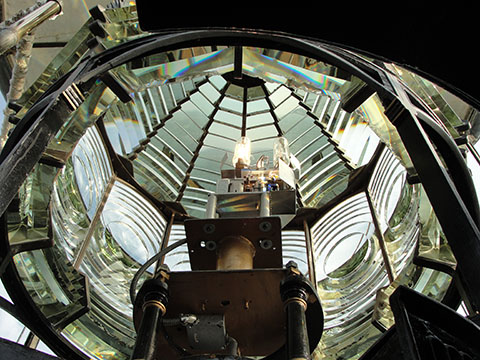 A 2011 picture shows the inside of the Boston Light Fresnel lens. The unlit lamp serves as backup in case the first one burns out. Courtesy of Sally Snowman

The heart of a Fresnel lighthouse lens looks like a transparent bull’s eye. You might not guess it from the immense weight, but one of the tricks of Fresnel’s design was a clever way to slim down his lens. Scientists already knew that curved lenses, like the ones you find in a magnifying glass, concentrate light. Fresnel realized that only the outside edge played the important role of bending light in the desired direction. His design collapsed the curved lens into rings of concentric circles. Removing the unnecessary interior of the lens not only cut down on the weight, but also cut the amount of light absorbed by the glass. The strategic trimming meant the lenses could be many feet tall.

Other parts of the lens catch the light escaping above and below the main “bull’s eye” panels and redirect it out to sea.

Fresnel’s design met with initial skepticism from the French Lighthouse Commission, but when he came back with a lens to test, the results spoke for themselves. The first lens was installed in 1822 at a lighthouse near the mouth of the Gironde River in France and was visible for more than 20 miles. Within a few years all French lighthouses were equipped with Fresnel lenses.

The technology was slower to catch on in the United States. A penny-pinching federal official who oversaw the Treasury Department’s Lighthouse Establishment denied funds for the new lenses until Congress ordered an investigation into the quality of U.S. lighthouses. The first Fresnel lenses in America were installed in 1841 in New York.

By making shipping safer, Fresnel lenses played an important part in the explosion in global trade during the 19th century, said Theresa Levitt, a science historian at the University of Mississippi in Oxford who wrote a book about the life of Fresnel and his role in the birth of the modern lighthouse. As she researched for her book, Levitt changed her mindset about Fresnel’s work. “I went from thinking that he was a physicist, somewhat distracted by this work on applied technology, to really seeing that he himself saw this as his major contribution to humanity.”

Although many lighthouses have now been outfitted with more modern optics, 81 classical Fresnel lenses still operate throughout the U.S.

“I find the beauty and durability of the Fresnel lens to be its most amazing qualities,” said Jim Dunlap, one of six “lampists” in the U.S. who are qualified to clean, repair, move and otherwise work on Fresnel lighthouse lenses. “They were made in an age when the appearance of a product — even industrial machinery such as a lighthouse optic — was an important factor in its design.”

As for the lens in Boston Light, it still guides modern-day mariners, with a characteristic wink of light every 10 seconds. After 157 years, “it’s amazing it’s still doing its shtick,” said Snowman. “Visitors can get nose-to-nose with it. It’s just such a unique place.”

Reprinted with permission from Inside Science, an editorially independent news product of the American Institute of Physics, a nonprofit organization dedicated to advancing, promoting and serving the physical sciences. (Note the article links to our inventory of Fresnel Lens at https://uslhs.org/history/fresnel-lenses/classical-fresnel-lenses/fresnel-lenses-operational-list)